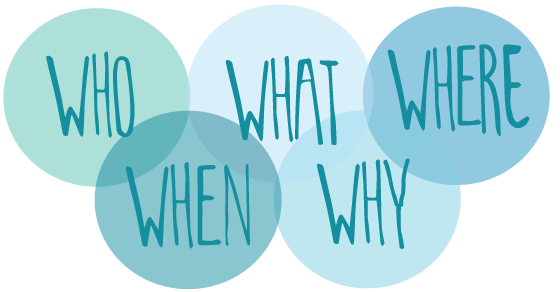 I’m not sure how this came to mind exactly. I had thought about doing a mock interview with myself (like I don’t talk to myself enough already) but for whatever reason I couldn’t think of a way to make it work the way I’d want it to. So instead of asking myself questions, I thought I’d do my own version of the five W’s; Who, What, When, Where and Why.  I’ll forego the sometimes added sixth, How, since that’s probably covered in a bunch of other posts. And, if you don’t mind, I’ll start with the easier ones first.

What do I write?

I usually describe the House Valerius novels as urban fantasy. That seems to be the closest fit although some of the short stories accompanying them could fall into other categories as well, I think. And, as I mentioned in recent posts, I’ve tried writing some other pieces in the Sci-fi, fantasy and horror genres as well.

When do I write?

Something I’ve been having a little bit of difficulty with lately. Between work, the new business and the need to sleep, I basically have two periods in a weekday where I can write. One is during my lunch break at work. Between the hours I keep and the hours I’m required to put in, I often have close to 90 minutes of me time. Obviously some of that is taken up by my actual lunch but that should still leave me about an hour to write. No ideal, since I’m frequently interrupted by co-workers but I can often get something down. The other time is after dinner & whatever time the new business requires and going to bed, maybe 9.30 to 11 or thereabouts. Again, not ideal since it’s at the end of the day and half the time I just want to switch off but it’s what I have to work with

Where do I write?

One of the requirements of the new business was the refitting of the spare room as a combination storage room, photographing area and display room. Which meant getting rid of the desk and moving myself to the couch in the living room. There are good points and bad points about this. It’s very comfortable, which depending on how I tired I am can be either good or bad. And, of course, there’s the potential distraction of the Blu-Ray player with its connection to Netflix/Hulu/Amazon.

Who do I write about? Who am I when I’m writing?

Who I write about, I think is answered best by the posts available here. Who I am when I’m writing; well, it might be easier to say who I am when I’m not writing. And that is someone who feels like there’s something missing from his life.

Why do I write?

As said above, because when I’m not, I feel like there’s something missing. No matter how frustrated I might get by my progress (or lack thereof), writing is still something I love to do. And, when it’s working, there’s few better feelings.