This year was our third visit to Universal Studios annual Halloween Horror Nights and, in a way, it became something of a combination between our previous two trips.

We only had the one evening and we had my mother-in-law with us, just like 2014 but we learned from last year’s visit and spent some extra to get us a guided tour. we thought that not only would this help us get around the houses in the most efficient manner possible, it would also give us built-in rest breaks. The one downside was that since our tour was 7.30 to midnight, and we couldn’t get into the park until 6.30, there wasn’t a lot of time for exploring beforehand. Hence why some of my photos from the scare zones aren’t the best. But there was a bit of time and I did get some good pics. 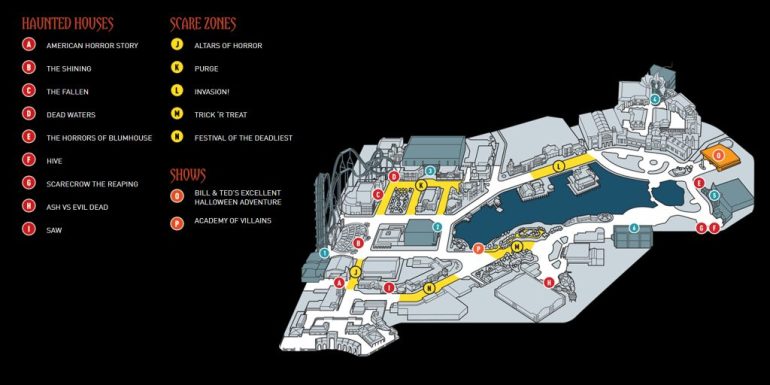 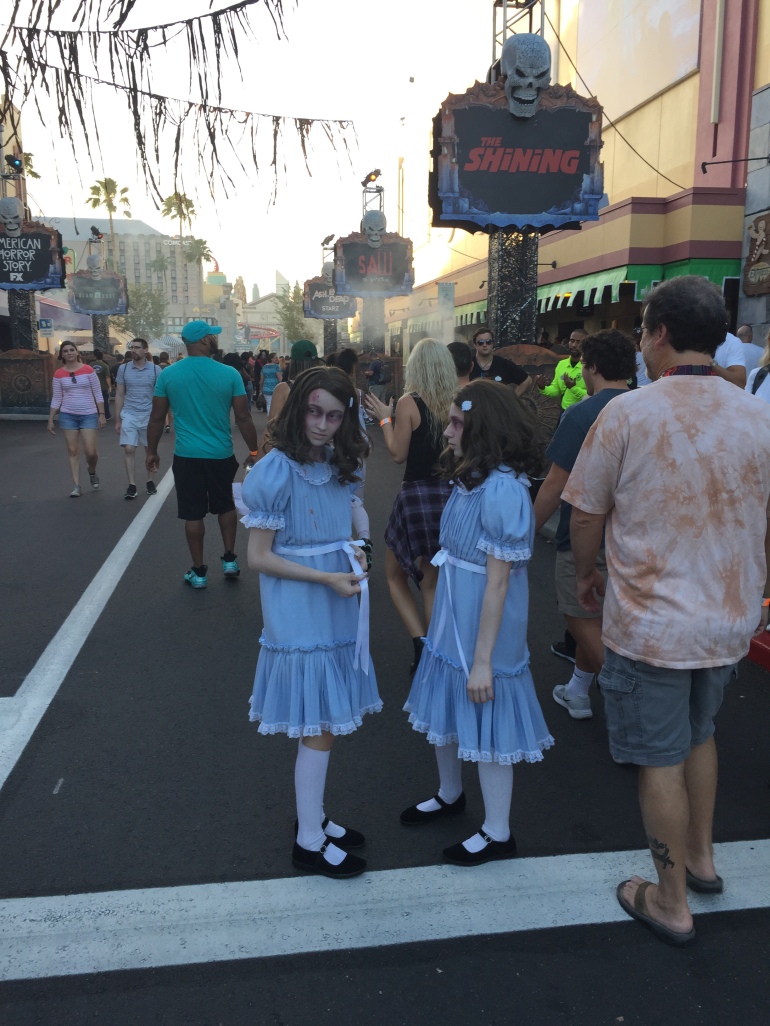 Anyways, we moved on through the park, had a quick jaunt on the Revenge of the Mummy rollercoaster and found ourselves wandering the Purge zone.

By the time we got done taking in the sights (and dodging the scare actors), it was getting close to time for us to check-in. So we headed for Cafe La Bamba, but took a bit of a detour to go see the Festival of the Deadliest.

As it turned out, we were still a little early checking in so they bumped up our start time to 7.15. That still gave us time to have a little sit-down, grab a quick bite to eat and some water before venturing back out.

Before I start on about the houses, I will be making the assumption that you’ve seen the films or TV shows the IP houses were based on, although to be honest, there were more we hadn’t seen than those we had. Oh, and in case you were wondering, we were in the “Chainsaw” group. There’s always chainsaws…

Our first house of the evening was Saw: The Games of Jigsaw. This one didn’t focus on any one film in particular, opting instead to do more of a greatest hits. It was also less of a jump out scare house and more a showcase for the intricate traps seen in the series. Plus that creepy little puppet on a trike and people in pig masks. 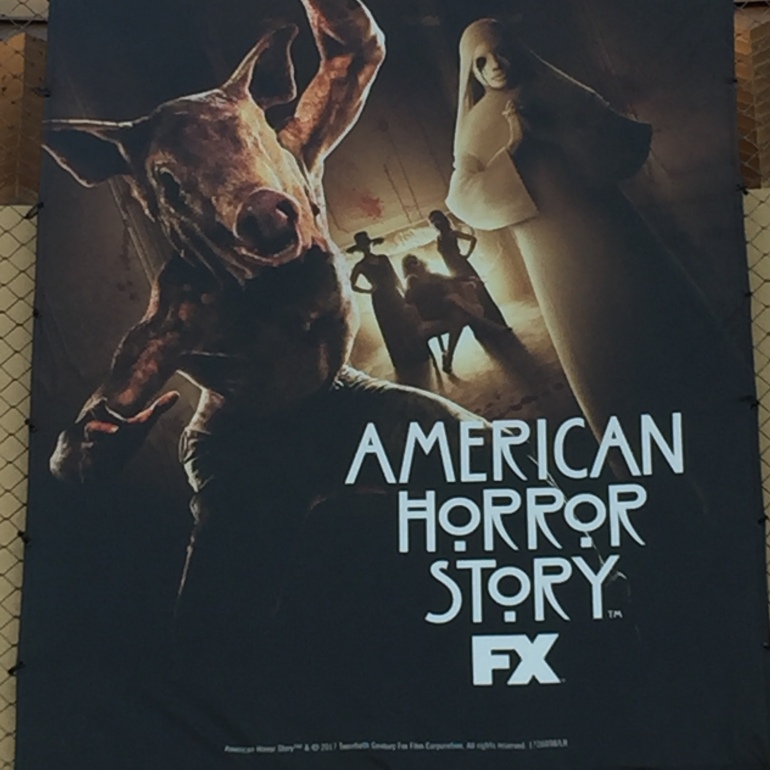 Next, more people in pig masks, courtesy of American Horror Story. Now in it’s second year, this house covered the seasons that we didn’t previously; namely Asylum, Coven and Roanoke. We started in the asylum with weeping (and suddenly moving) statues, Bloody Face and possibly one of the simplest but best tricks we’ve seen. We were already into the Coven area before I realised we’d changed seasons and, to be honest, I don’t remember much from here until we crossed into Roanoake. As you might imagine, plenty of scares on the last one, with people in colonial costume and, as I said, people in pig masks.

Time for us to visit the Overlook Hotel. The house followed the plot of the film pretty well and if the scare actor playing Jack Nicholson’s character wasn’t a great match, the others generally made up for it. The highlight for me was the elevator of blood, handled by a nifty video effect.
After a short break, we did the next two original houses back to back. Dead Waters was probably the most elaborate house, beginning with a crashed steamboat, travelling through it’s slanting corridors before heading out into the bayou to meet the Voodoo Queen. I would have really liked to see this one during the day…
Fallen might have had a slightly less (although not by much) impressive set but that was made up for by the costuming of the scare actors as well as the unexpected danger of having some of them on wires, flying at us. And I’m fairly sure I remember a demon woman ripping someone’s spine out.

Another short break, then we had to brave two more scare zones; The Purge again then Invasion! By this time it was getting to be fairly dark and we were moving quickly so this is the best photo I got of aliens having landed in 1950’s America.

Then, after a quick side-trip to shoot some other aliens on the Men In Black ride, we went to tackle the Horrors of Blumhouse.Similar to the AHS house, this took elements from three film series; Sinister, The Purge & Insidious. I suspect we might have got more out of it if we’d seen either the Sinister or Insidious films but, as it was, the most memorable element for me was the projection on the front of the house, with slowly spreading cracks working their way across the facade.

​
Another break, this time to take in the Bill & Ted’s Excellent Halloween Adventure show. I have to admit I think I preferred last years show but this was still fun, especially since it is to be the last. Less Trump jokes that you might expect but they did get some good mileage out of someone impersonating Melissa McCarthy impersonating Sean Spicer. 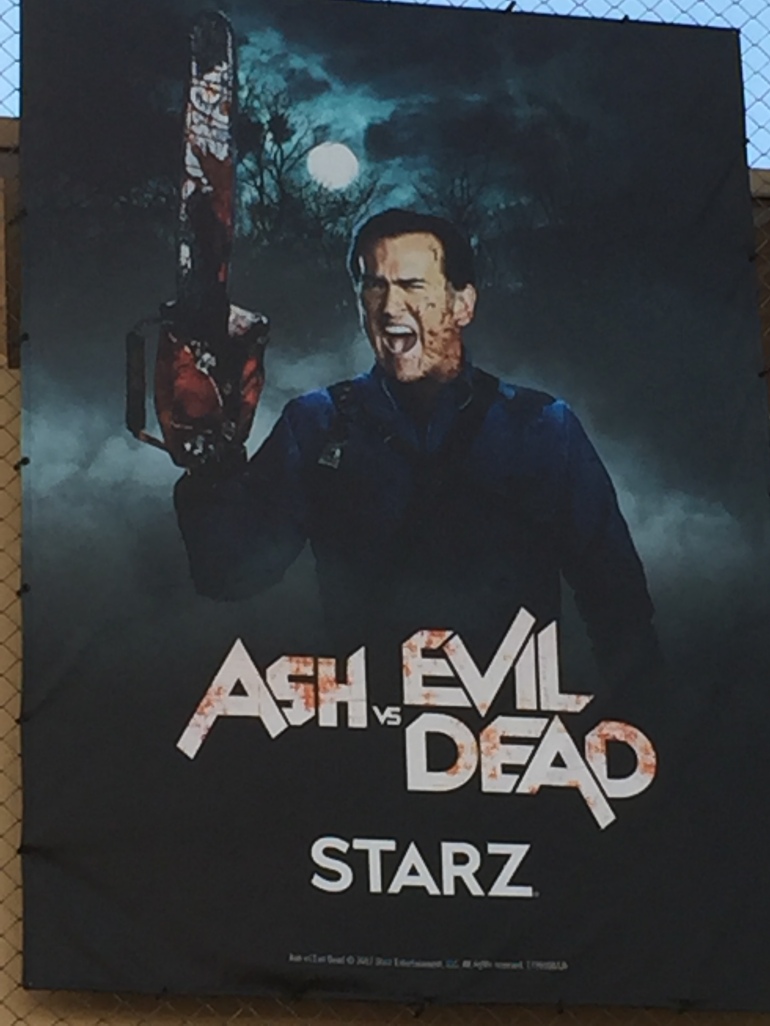 I really wanted to like Ash Vs. The Evil Dead and I suppose I did although I will admit being a bit underwhelmed. Using actual dialogue and set pieces from the show made it fun though as did the music and getting sprayed with fake beer on the way out.

The penultimate house of the evening ended up being our favourite. Scarecrow: The Reaping featured actual cornfields grown for the occasion before having sackcloth masked scare actors reaching out from the remains of a Dust Bowl-era farmhouse.

The last house, The Hive, took us through a dilapidated house that has become the nest for a group of vampires. And proper animalistic type vampires at that.

Technically our tour was over at this point but we still had one last scare zone to see, this one based on the film Trick R Treat.

Unfortunately, I didn’t get much in the way of useable photos from this area and we were all getting tired. Being the brave (or foolish) soul that I am, I did try to do some of the houses again but only managed two before the wait lines defeated me.

And that was our Halloween adventure for this year. If you want to see actual video footage from inside the houses as well as a more detailed review, then you can find those here.